The environment in which their work appears is often important to sculptors. Rob Lorenson looked not only at the intersection where Reinvented is placed, but beyond it, at what defines the city of Newport News. His ideas about what should go on that site were formed by two of the local economic drivers: manufacturing (dominated by a shipyard making submarines and aircraft carriers) and technology centered around nearby research centers that look deep within matter’s subatomic particles, at the Jefferson Lab, and far into space, at the NASA Langley Research Center.

Precise and polished, mechanistic and modern, Reinvented is a perfect fit for the city’s major industrial and commercial center. Its stainless steel material, clean lines and burnished surface give it what Lorenson calls a “sleek, high-tech feel,” while “they also recall the industries that have been the base of the city.”

Rather than making himself obvious in his art, Lorenson strives to create works that are so “exceptionally crafted as to remove the hand of the artist. The purpose of this is to further emphasize the compositional qualities of the work. I also intend to make the work look manufactured, as though it were an industrial product produced in a factory, like the industrial forms that originally influenced it.”

Audio Tour: Hear Lorenson tell you about his piece

Transcription:
My name is Rob Lorenson. My sculpture is Reinvented, which is located at the corner of Thimble Shoals and Canon. The work is fabricated from stainless steel and appears as a large silver ring form that is about 16 feet in diameter. The piece was constructed by my assistants and myself starting in 2004 and was completed in April of 2005. The work is really about working with metal.  One of the more common manipulations to metal is bending. The work is constructed so it looks like a bar of metal twisted and formed into a ring. The bottom is accordion folded to create a relief bend on the lower half.

The shaping of this piece is like the renaissance that Newport News has undertaken onto itself. The city has literally bent and reshaped itself much like the sculpture, which has ultimately become part of that process.

Sculpture, to me, has been a journey that has taken the better part of the last 24 years. I became involved in it because I sincerely enjoy making things. I like the engineering, the manipulation of materials, and the feeling it evokes when the work is finally bolted down. I like the camaraderie of my studio, the artists who are my contemporaries, and the public at large.

This piece is part of a larger body of work that deals with ring forms. They all celebrate the material and the making. The ring form can also be seen as a shape of continuity and renewal. 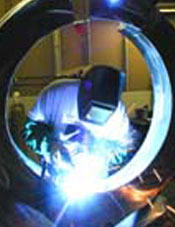 About The Artist: ROB LORENSON

Rob Lorenson’s precise, polished, geometric works are familiar to people in communities across the nation. His sculptures have been acquired by colleges, art centers, developments and corporate collectors, and he has shown his work in dozens of individual and group exhibitions and art festivals from San Francisco to Boston. They range from small table-top pieces to massive works on the scale of Newport News’s Reinvented, which is 16’ in diameter. What they have in common is that they are made of metal, using similar techniques and drawing on expertise Lorenson developed during fabrication apprenticeships with three metals-intensive sculptors.

Lorenson earned his MFA in Sculpture from Northern Illinois University and his BFA from the University of North Iowa. Today, he lives and works in southeastern Massachusetts, where he is a professor on the faculty of the Art Department at Bridgewater State College. 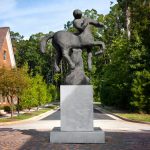 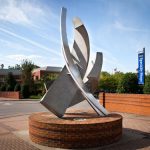