With its soaring lines and gleaming metal surface, Izar is well suited to its site: at the entrance to the airport serving Newport News and the surrounding community. So, too, is the story behind it: Izar is an occupant of the sky, one of the stars in the constellation called Bootes, the form of a man with one arm raised, holding, perhaps, a scythe or reins. Among the stories associated with this figure is that he drives the bears of the nearby constellations Ursa Major and Ursa Minor around the Pole Star, Polaris.

To appreciate Izar, it helps to understand how Bruce White works. He likes to start with a sheet of paper or thin metal and twist, turn and manipulate it until something plain and flat becomes something complex and three-dimensional. White describes this process as seeing something new and unexpected in the commonplace. In the case of Izar, the flat shape became a large parallelogram, split vertically into six connected panels that are arrayed in a gentle twist around a central axis. The result is an interplay of planes and spaces, made more complex still by the surface tracings and the shimmering show they put on as the light changes from day into night.

Audio Tour: Hear White tell you about his piece

Transcription:
This is Bruce White, the creator of the sculpture Izar. Izar is located at the entrance to the Newport News International Airport. Ideas for original discoveries in both science and art are often overlooked in the search for the new due to the failure to recognize the potential of an accident or to see the new in the commonplace. As a sculptor, what I see in each new accident determines the look of my work. I try to generate each new idea by cutting and manipulating sheet material in a variety of cuts and twists. It is up to me to recognize the potential in each variation. Rarely do I ever begin by drawing.

Izar is a perfect example of this process. I began this particular search by impulsively cutting out of paper an elongated parallelogram. Next I made 5 alternating cuts lengthwise on the parallelogram. I then joined the outer members on their outside edges. In bringing the ends together, a dimensional, tubular form develops with a marvelous flare at each end.  A surprise. Something completely unexpected.

I generally do not begin with a specific idea in mind, but rather look forward to surprising myself and hope to share the excitement of discovery with the viewer. 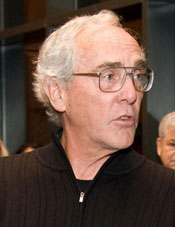 About The Artist: Bruce White

Many of White’s works begin as sheets of metal or paper that he cuts and twists and manipulates until they reveal the three-dimensional thing of beauty and meaning that the artist’s eye can see within the flat plane. Then he translates the resulting idea into a sculpture of monumental scale, working in a studio that is, necessarily, on the scale of an industrial warehouse. 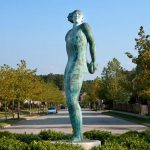