The inscription on this monument reads “Service to a just cause … to serve the community, to safeguard lives and property, to protect the innocent against deception, the weak against oppression or intimidation and the peaceful against violence or disorder.” On the reverse is the shield of the Newport News Police, but as the Chief of Police observed at its dedication, this is a monument not only to those who serve in uniform, but to all who serve the community, “past, present and future.”

The monument is sited so it faces the police headquarters. Benches and a black granite fountain inscribed with the words “with a common mission” invite visitors to stop and reflect on those who serve and the community’s reliance on them.

The sculpture is the work of Gregory Henry, who teaches at nearby Christopher Newport University.

Audio Tour: Hear Henry tell you about his piece

Transcription:
This monument to service by sculptor Gregory Henry is in front of the Newport News Police Department. The inscription, “Service to a Just Cause,” is taken from the law enforcement code of ethics:

On the side facing the street is the badge police officers wear, but as the mayor noted when the monument was unveiled in September 2007, it is dedicated not just to police but to all the workers who serve the city and its citizens.

The granite wall, crafted in Pennsylvania, conveys strength and stability, and its gentle curve creates a protected inner area. The black granite fountain with the words “With a common mission” inscribed around its rim adds a peaceful note. The benches invite visitors to stop and reflect on the meaning of service.

Gregory Henry teaches sculpture and other visual arts at Christopher Newport University in Newport News. He earned his undergraduate degree in Fine Arts at Ohio University and his Masters at the Rinehart School of Sculpture at the Maryland Institute College of Art. His paintings and sculpture have been exhibited in cities across the nation. Some of his work draws on the objects, icons, and culture of his native Guyana. 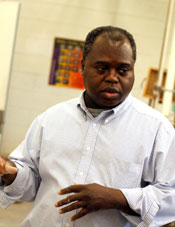 About The Artist: GREGORY HENRY

Greg Henry is a sculptor, but not just a sculptor.

He is a painter. His vivid, engaging works have been featured in exhibitions in Atlanta, Dallas, Houston, and Maine as well as in Virginia.

He is a teller of stories. The children’s book Chickens! Chickens!, which he illustrated, won the 1995 National Parents Choice Silver Honors.

He is a teacher, currently at Christopher Newport University in Newport News, Virginia, where he teaches sculpture, ceramics, drawing and other visual arts.

In two dimensions and three, in visuals and in words, much of Henry’s work draws on the objects, icons and fables of his native Guyana. He explains, “As an artist, I have always been interested in life and death in the workings of the environment and its support of those things that are tangible and those that aren’t. In trying to depict such phenomena, I started using simple everyday objects from my Guyanese culture that surrounded me during my youth — pots, pans, chickens and other animal forms. I use these objects as icons that tell the story of the culture and its workings as it relates to the composition of the environment and the life cycle. My interests have expanded to include general icons and fables from Guyanese, African and other South American cultures. In trying to depict different aspects of life, objects are juxtaposed to tell a specific tale or parable.”

Henry earned his undergraduate degree in fine arts at Ohio University and his master’s at the Reinhart School of Sculpture at the Maryland Institute College of Art. His work is in the collections of the Corcoran Gallery in Washington, D.C., the Harriet Tubman Museum in Atlanta, Ronald Reagan International Airport, The Studio Museum in Harlem, Artscape in Baltimore, the Kansas African American Museum in Wichita, the Kennedy Museum of Art at Ohio University, Capital One Corporation and Phillip Morris corporate headquarters. 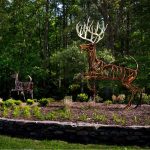 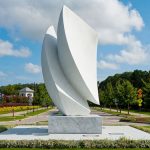