How do you see something as intangible as time? In Lee Tribe’s hands, time takes on the three dimensions of physical presence, with a shape that’s intriguing.

Tribe marks off time in smooth arcs, but he interrupts them with what he calls “areas of activity,” busy with triangles, pods, disks and pipes that mix together, just as life does, sharp edges and straight bits. He curves the resulting shape into a circle because, Tribe says, like time itself, a circle “has no beginning, no end. It simply goes on.”

But don’t get hung up, Tribe would say, on trying to find a literal meaning in his piece, a neat explanation that sums it up. He’d prefer for it to have what he calls magic: “the fascination which brings us back to enjoy a thing again and again … that mystery which holds our attention and causes us to ask questions, that condition where we may learn more.”

Audio Tour: Hear Tribe tell you about his piece

Transcription of Audio Tour:
In 1980, I purchased a load of old pipes from a steel works. I ran these pipes through a roller, curving and twisting them. I began assembling the curves in a spontaneous way, following the path of the pipes, unable to stop the flow. The intended arc became a circle.

I began thinking of the universal symbolic nature of circles, used in so many cultures. It is the shape of the sun and moon and describes their passage. In Zen, it is a symbol for wholeness and completion and the cyclical nature of existence. It is a fine metaphor for the journey of life.

Time, the title, grew to belong to the piece as the piece itself grew, for looking at it requires time. One’s eye begins the journey smoothly, but is then held for moments by an arrangement of forms, then continues on to meet the next area of activity and so on. The circle has no beginning or end, it simply goes on.

I do not wish for Time to have a clear literal meaning. Clarity of interpretation may satisfy, but in turn it may dispel the potential magic, the fascination, that which brings us back to enjoy a thing again and again, that mystery which holds our attention and causes us to ask questions. That condition where we may learn more. With all of this in mind, what better location for my sculpture, close to a school and by the entrance of a cemetery, where a person may take the time to look and think, where perhaps it may offer a little comfort and meaning.

About The Artist: LEE TRIBE

To understand Lee Tribe’s work, you have to go back to the beginning of his working life, when young Lee followed his father and brother to the docks of London to learn the trade of boilermaker.

While he mastered his craft, Tribe was captivated by the shapes and colors of the exotic goods that flowed through the port. His imagination stoked, he traded the waterfront for art school, first in England and then at the New York Studio School.

Tribe left the docks, but he didn’t leave behind the skills or inspiration he found there. The cacophony of cultures he discovered makes appearances in his work. He continues to work metal, incorporating cable, chains, rods and hardware into his work.

Tribe’s promise was apparent early, and in 1976 he won an Arts Council of Great Britain Award in Sculpture. He went on to win a Guggenheim Fellowship, a Pollock/Krasner Foundation Fellowship, the Ingram Merrill Sculpture Award and the International Sculpture Center Bronze Casting Competition. In 2010 he was honored with election to the 185-year old National Academy in New York.

Tribe’s work has been showcased in exhibitions organized by the American Academy of Arts and Letters and by galleries in England, the United States, Europe, Japan and Africa. His work is in the collections of the Arts Council of Great Britain; the Storm King Sculpture Center in New York; and museums, colleges and private collectors worldwide.

Tribe is a teacher as well as an artist. He has guided scores of student sculptors at the New York Studio School, served as artist in residence at the University of North Carolina in Greensboro and head of sculpture at Bennington College, and taught at Columbia University, Hunter College, Pratt Institute and the Chautauqua Summer School. 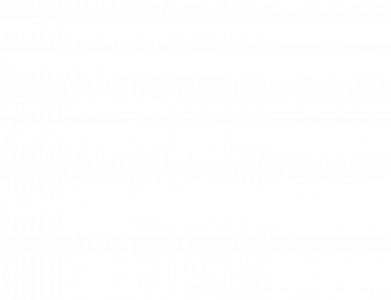 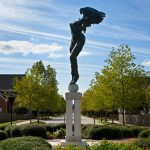 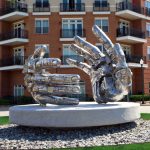