Newport News’s outdoor art gallery is growing! We have projects in various stages of development, and one will become a reality very soon: 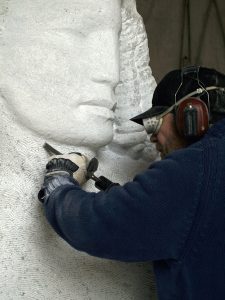 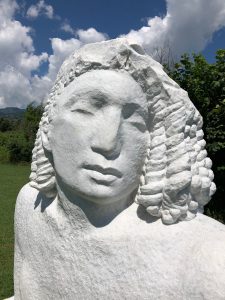 This oasis in the city provides a peaceful green space to connect with nature in the center of a busy environment. Chatham Trail’s large pond with a fountain is surrounded by a stone dust trail – a surface safe for all walkers – benches, signature landscaping, and a soon-to-be-planted rain garden. Installing La Luna will bring a museum-quality art experience to the park.

Swedish sculptor Lars Widenfalk has spent his life carving, starting as a very young boy making wooden figurines in northern Sweden on summer vacations. His brother the geologist and father the minister sparked dual interests in stone and religious ceremonies, interests which he consolidated in degrees in archaeology and art at Uppsala University in Sweden, and furthered with sculpture training at the Oslo National Academy of the Arts in Norway. Widenfalk’s archaeological interest is reflected in his work. He prefers to work in stone, a material that suits his subject matter best, as stone is a material that does not deteriorate. While he often carves in Swedish granite, La Luna was carved in Pietrasanta, Italy, out of Carrara marble, another place and material important to him. His sculptures themselves appear as recently excavated, ancient artifacts: pieces of ruins. Ruins suggest what might have been in the distant past, but do not provide concrete answers.

A similar quality of mystery and suggestion imbues Widenfalk’s work. La Luna’s eyes are closed but her face upturned, basking. The expression on her face is peaceful, the work itself slightly mysterious. Who is she? While “la luna” means moon in Italian, Widenfalk isn’t necessarily personifying the moon with this figure, but indicating a feminine, remote, and benevolent presence that seems timeless. This archaic Egyptian quality also appears in many of Widenfalk’s sculptures, a quality he was drawn to during his archaeological studies. The sculpture’s eyes often draw the viewer’s gaze first, even if they are carved as partially closed, their gaze far-reaching. In La Luna’s face, we see the characteristic line connecting the eyebrow and the nose, a feature in many of Widenfalk’s carved faces.

SUPPORT PUBLIC ART! FIND OUT HOW